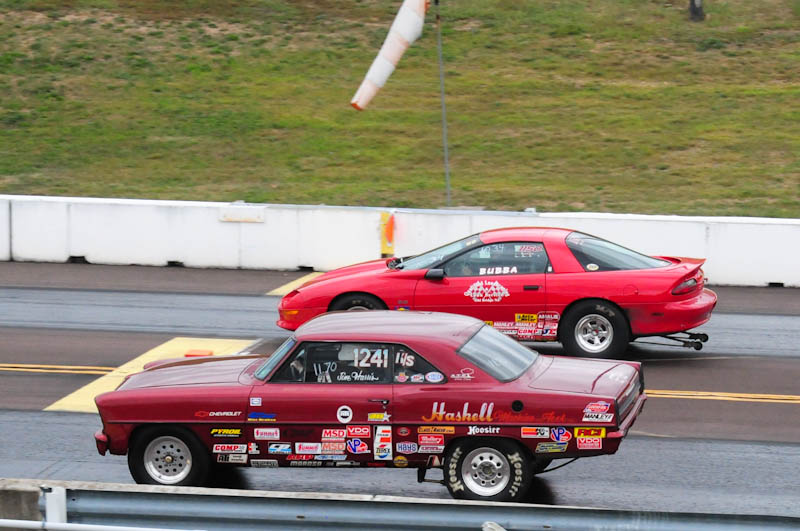 One of the toughest skills to master for any bracket or sportsman racer is that of “driving the finish line”, or crossing the finish line ahead of your opponent by the least margin possible. The reason for doing that is to avoid running out, or running quicker than your dial-in or index.

Among the difficulties associated with reaching that goal is that there is no way to practice it. While you can practice your starting line skills with a practice tree, there is no “practice box” with which to practice your finish line tactics. There are far too many variables involved in order to become successful at it.

One such variable is just which part of your (or your opponent’s) car triggers the finish line timers. The 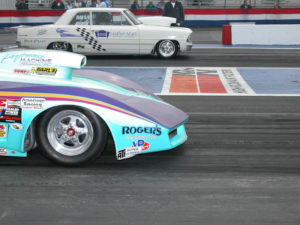 The varying differences in nose length of a car can play havoc when it comes to determining who takes the finish line first. The driver of this short nose Chevy II could find himself at a disadvantage at the finish line if he attempts to place his tire in front of the tire on this late model Corvette. The extra length of the Corvette nose is the thing that would hand the Chevy II driver the “LOSE” slip.

rule books of most sanctioning bodies list a rule that’s been on the books for quite a while. For open body cars such as dragsters, it reads: “Front overhang not to exceed 30-inches, measured from centerline of front spindle to forwardmost point of car.” To accommodate the front overhang on stock bodied vehicles, the maximum overhang is extended to 45-inches. In addition, the ground clearance of that nose must be no lower than three inches.

Today however, with the use of infrared photocells, that three inch dimension of the photocells has now been reduced to 1-1/4-inches. Still though, the interval photocells, as well as the finish line lights have been placed roughly five inches high. This being because the reflector portion in the middle of the track is mounted within the center of a ten-inch foam block. 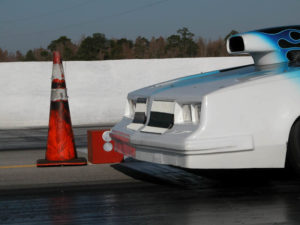 Lining up your car at the finish line photocell would obviously be the thing to do. However, there are few times that would be possible. Instead, measuring the front end of your car is about the best thing you can do to see which part of your car triggers the finish line first.

Bob Brockmeyer of Compulink Timing Systems; the most popular used timing system today; said, “We tried raising and lowering the interval photocells and found that the five-inch dimension just created the most repeatability. We noticed when we had the photocells very low, like at the starting line, there were instances where a bump might cause the front tire to bounce over the bulb. That’s why the sixty foot photocell is mounted ten-inches in the air, because there are some cars that will still be carrying their front ends high at that point due to a wheelstand.”

So as the scenario is then played out, should the front end of your car be only three inches high, while you’ll stage with the front tires you’ll turn off the interval timers with the front end of your car. This also counts on the finish line; which means that if you’re attempting to finish line race your opponent, and you’re thinking of judging his front wheels, you would be incorrect, and most likely lose.

The theory behind this fact is something that has sparked more conversations in the pits than just how bad a pit parking space you’ve got. In the earlier days of sportsman and bracket racing, this wasn’t as big an issue as it is today, since there weren’t as many races decided by thousandths of a second as there are now. In addition, there are more racers trying to “drive the finish line” than ever before. For these racers, knowing what triggers the finish line lights is a very important piece of information.

The reasoning behind have a longer “nose” on your car is that it will trigger the finish line photocell before the front tire does, in effect allowing for a quicker elapsed time. Is that theory sound? Think about it like this: At 150 miles-per-hour, you’re traveling at roughly 18-inches per second. This would obviously change should your mph be different, but in any event, that translates to .18-inches, or 3/16-of-an-inch, per hundredth-of-a-second.

The tip of the nose of your car, providing your nose is 30-inches long, is roughly 22-inches longer than the point on your tire that triggers the stage beam. This would mean you would trigger the finish line photocell 22-inches sooner. Or at 150-mph, that would translate to .0039 sooner than if your front tire was to trigger the beam.

As we stated earlier, racers in the sportsman and bracket classes try to cross the finish line first by as little a margin as possible. This so that they don’t run under their appointed index or dial-in. In order to accomplish that requires years of practice and it’s not uncommon for a driver to attempt to “take the finish line” by merely thousandths-of-a-second. The theory of the practice is to simply place your front wheel inches ahead of your opponent’s. The fallacy of it is that should a dragster with a 30-inch overhang be racing a door car with a 45-inch overhang, and should that dragster driver place his front wheel just five-inches in front of the door car’s tire, than the dragster would still come up ten-inches short of the finish line! How then do you account for that variable? Know what part of your car and your opponent’s triggers the finish line photocells.

As we said earlier, the center of the finish line photocell is set in the middle of a 10-inch foam block. 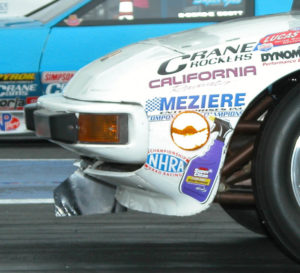 The driver of this vehicle has added an aluminum plate to the front end of his car in an attempt to assure that the very tip of his vehicle is what sets off the finish line lights first.

However, that block is placed in the middle of the racetrack. If in the center of the lane; which is the place your car travels; there happens to be a dip or a bump, then the point on your car that triggers the photocell will be different. That variable isn’t something you can control though.

Years ago, some racers went to the extent of abandoning the nose of their cars altogether in order to assure that it’s exactly the tire that crosses the finish line first. Of course that could only be done with an open bodied car, such as a dragster or altered. Full body car racers have gone to installing a plate that hangs down at the very tip of their car’s nose. Obviously that addition can’t be any lower than three inches, but it does the job required, assuring them that it’s the very tip of their car that shuts off the finish line timers.

A simple measurement of your front end will tell you that. Now however, while you’ll know which part of your car will trigger the finish line beams, you still need to know which part of your opponent’s car does the same thing. The difference can add up to only thousandths-of-a-second, but when we’re talking about trying to “squeeze” the finish line, those thousandths can mean the difference between seeing the “W” pointing toward your side of the time slip or your opponents. 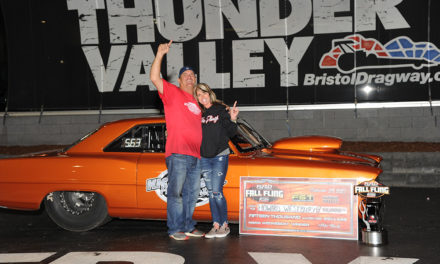 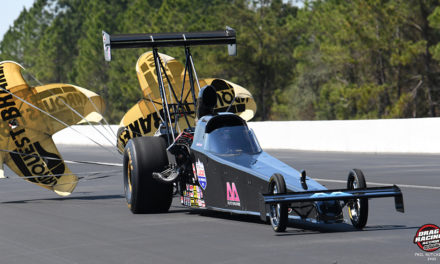 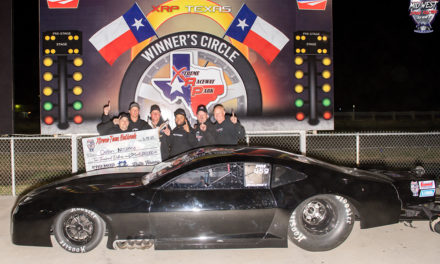 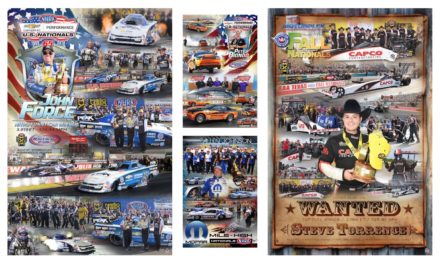 OWN THE SAME ART AS YOUR FAVORITE DRIVER