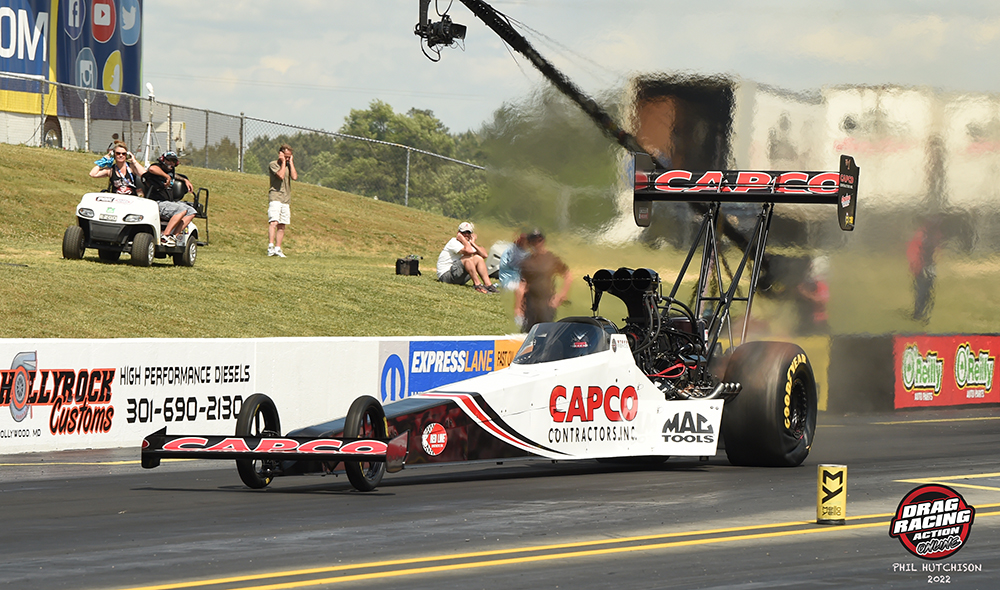 DINWIDDIE, Va. (May 4, 2022) – For the first time since 2019, the NHRA Camping World Drag Racing Series is set to return to Virginia Motorsports Park for the Virginia NHRA Nationals on May 13-15.

The track located in Dinwiddie Va. south of Petersburg, opened in 1994, has had an interesting history. Originally sanctioned by the NHRA, the track held national events including the popular Virginia Is For Lovers Nationals.  Later the NHRA decided to change course and move the Virginia race to the new zMAX track in Charlotte N.C. Without a marquee event, the owners switched to the IHRA in 2010 and held a national event there for two years until the IHRA ceased to feature the Pro classes and in 2012 VMP returned to the NHRA fold. Once back with the NHRA, VMP featured a divisional Lucas Oil event and regional Pro Mod and specialty races.

In 2017 Pro Mod racer Tommy Franklin purchased the facility and things started to change for the better. In 2018 after the closure of Englishtown in Jersey and the cancelation of the Summernationals, the NHRA brought the professional classes back for the Virginia NHRA Nationals.

In the time Franklin has owned the track, numerous improvements have taken place the most notable is the installation of high-powered Musco LED lights that illuminate the track at night as if it was daylight. The track is also the home base for the PDRA (Professional Drag Racing Association) and holds two of the association’s events cumulating at the PDRA Brian Olson MemorialFinals held in October. 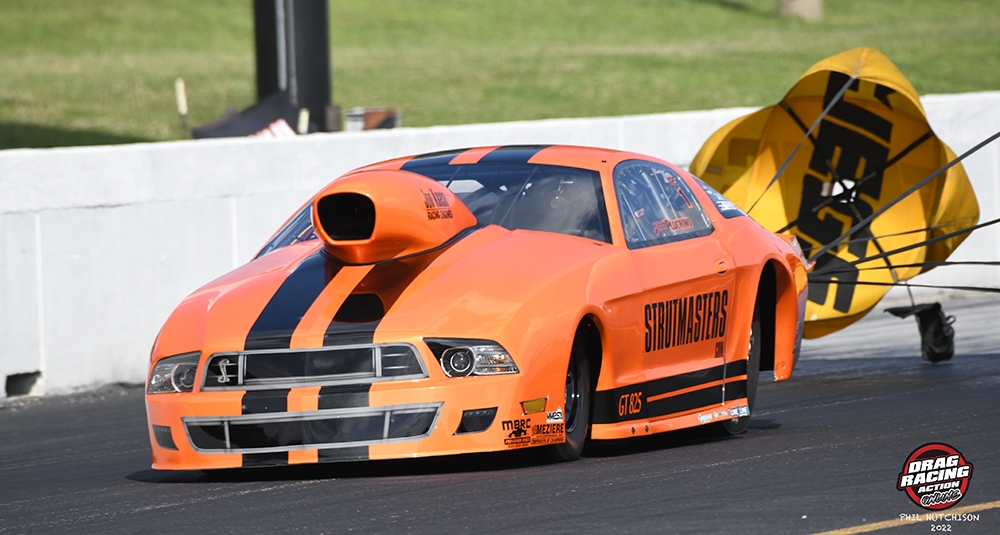 Mountain Motor Pro Stock will be featured at VMP in 2022

The Virginia NHRA Nationals marks the seventh of 22 races during the 2022 season. Along with the thrilling action of 11,000-horsepower, 330-mph nitro cars, fans will get to enjoy incredible racing in a variety of classes, a can’t-miss Friday night qualifying session under the lights, a special exhibition race, eliminations on Sunday and much more.

The top stars in Top Fuel, Funny Car and Pro Stock Motorcycle will all look to win in NHRA’s return to Virginia and will be eager to put on a show on one of the top racing surfaces on the NHRA circuit. Joining those three classes in Virginia will be the popular FuelTech NHRA Pro Mod Series presented by D-Wagon, Constant Aviation Factory Stock Showdown and Top Fuel Harley. The Mountain Motor Pro Stock class will bring their exciting and powerful 800-plus cubic-inch engines to Virginia Motorsports Park, while fans can also enjoy a spectacular exhibition race between Top Fuel Motorcycle standouts Larry “Spiderman” McBride and Dave Vantine. The action from the weekend will be broadcast on Fox Sports 1 (FS1). 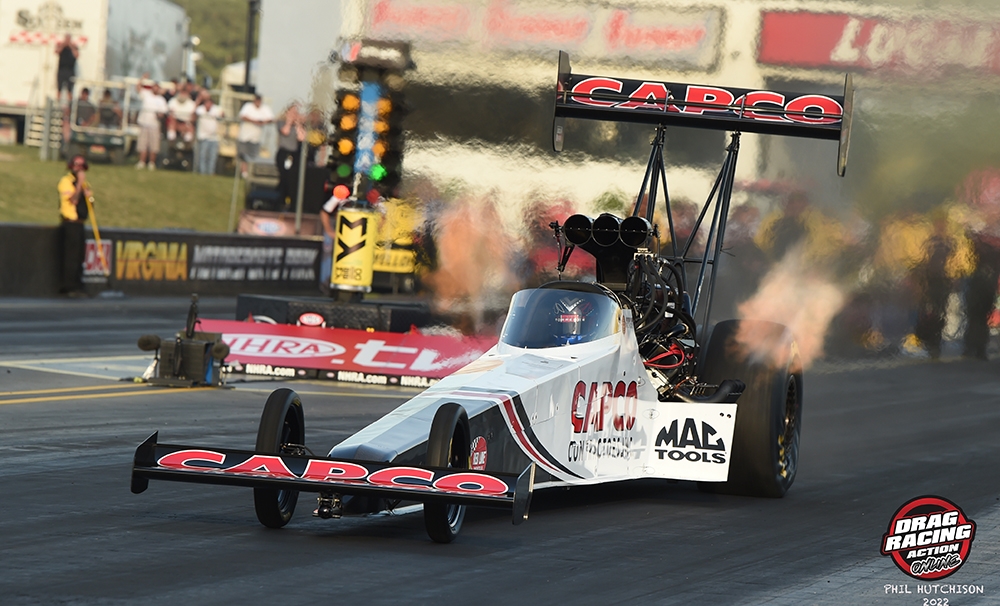 Top Fuel’s Steve Torrence won both the 2018 and 2019 events in NHRA’s return to the track, using that momentum to win world titles in both years. He’s won the last four championships in the nitro class, but the Texan is after his first win in 2022 in the loaded class. Brittany Force and Mike Salinas both have two wins this year, with Force currently leading the points. Other standouts to watch in Virginia include Pomona winner Justin Ashley, eight-time world champ Tony Schumacher, Doug Kalitta, who won the event in 2007, Antron Brown, Josh Hart, Leah Pruett, Clay Millican and Austin Prock. 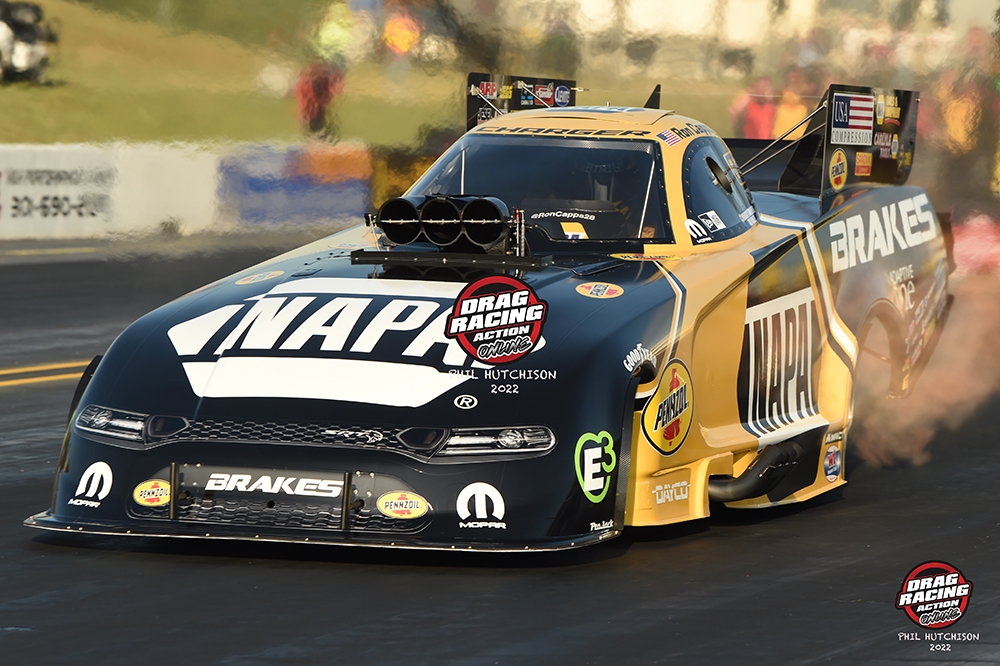 Funny Car legend John Force has four wins in Virginia, with the last coming in 2000 and heads to VMP on a roll thanks to his impressive four-wide win in Charlotte. He’ll look to add another win to his incredible resume, but it won’t be in a class filled with star drivers. It starts with points leader Matt Hagan, who has two wins in 2022, and features defending world champ Ron Capps, who won the race in 2019, Robert Hight, who has two wins in 2022, J.R. Todd, Cruz Pedregon, Alexis DeJoria, Tim Wilkerson, Bob Tasca III and Blake Alexander. 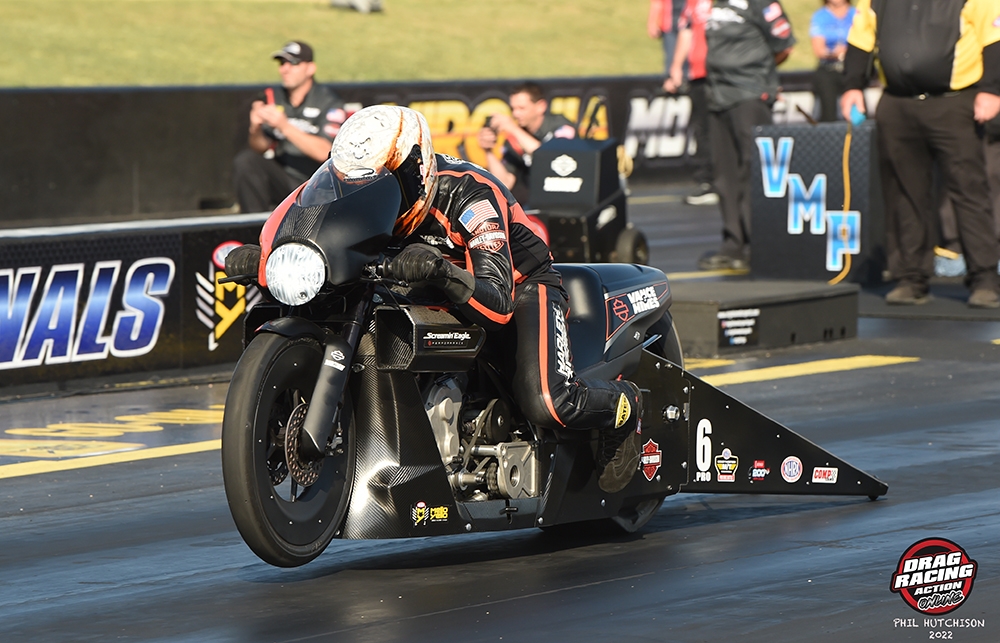 In Pro Stock Motorcycle, Steve Johnson will look to stay hot on his Suzuki in Virginia. Johnson, who enjoyed a career resurgence a year ago, has won back-to-back events to move into the points lead and will try to win for the first time in Virginia. In fact, no riders in the top 15 in the class have a victory at the facility. Plenty of standouts will try to change that in Virginia, including Karen Stoffer, who won in Gainesville to open the year, defending world champ Matt Smith, Angelle Sampey, Eddie Krawiec, Angie Smith, Joey Gladstone, Jerry Savoie and Jimmy Underdahl. 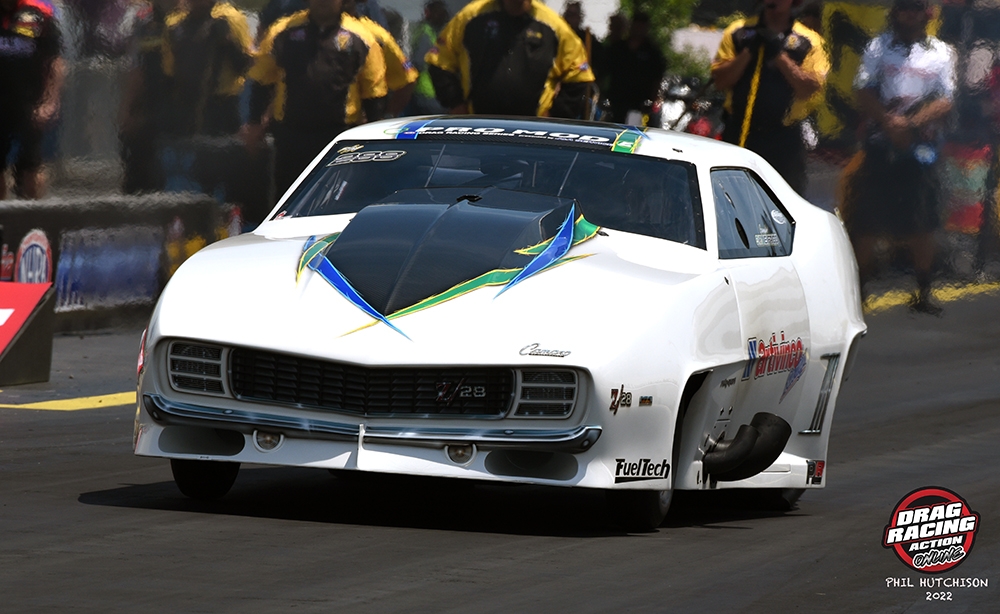 Sidnei Frigo won Pro Mod in 2019 in his Chevy Camaro

The event also will feature thrilling competition in the NHRA Lucas Oil Drag Racing Series, which features some of the sport’s top drivers, as well as the FuelTech NHRA Pro Mod Drag Racing Series presented by D-Wagon, Constant Aviation Factory Stock Showdown, Top Fuel Harley and Mountain Motor Pro Stock, offering fans a wealth of thrilling racing action from a variety of classes all weekend. Plus, the can’t-miss exhibition duel between Top Fuel Motorcycle standouts Larry “Spiderman” McBride and Dave Vantine will be a definite highlight of the weekend. 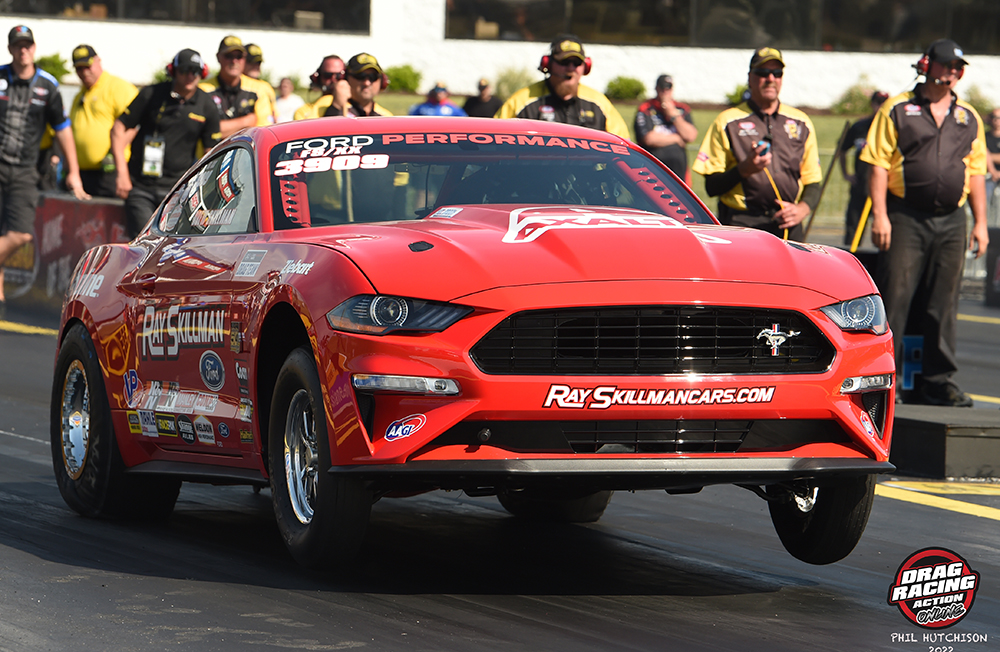 On Saturday, Toyota-sponsored drivers will be signing autographs at 11 a.m. at the Toyota Midway Display, while fans can attend Nitro School on Saturday to learn more about how the cars operate and reach their thrilling speeds.

Fans at Virginia Motorsports Park can enjoy the special pre-race ceremonies that introduce and celebrate each of the drivers racing for the prestigious Wally on Sunday and includes the fan-favorite Seal Master Track Walk. The final can’t-miss experience of any NHRA event is the winner’s circle celebration on Sunday after racing concludes, where fans are invited to congratulate the NHRA Virginia Nationals event winners. 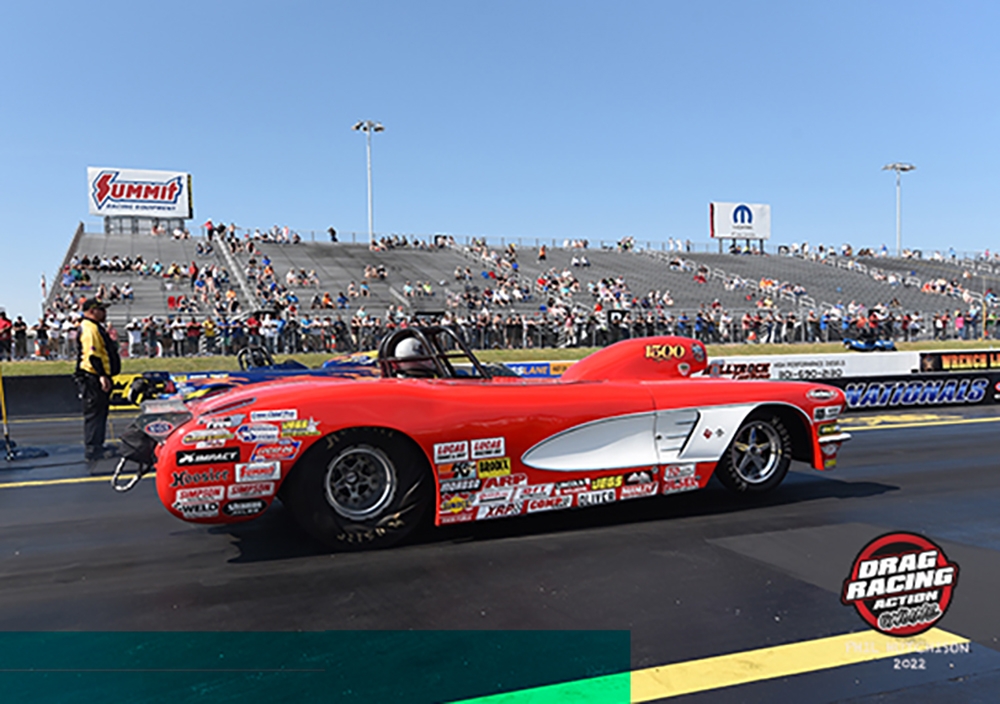 As always, fans also get an exclusive pit pass to the most powerful and sensory-filled motorsports attraction on the planet in Richmond. This unique opportunity gives fans a unique chance to see teams in action and service their hot rods between rounds, get autographs from their favorite NHRA drivers and more. Fans can also visit NHRA’s popular Nitro Alley and Manufacturers Midway, where sponsors and race vendors create an exciting atmosphere that includes interactive displays, simulated competitions, merchandise, food and fun for the entire family. The new Pep Boys midway display will include tire change challenges, oil change challenges, a slot car track and much more, adding even more excitement to the midway. 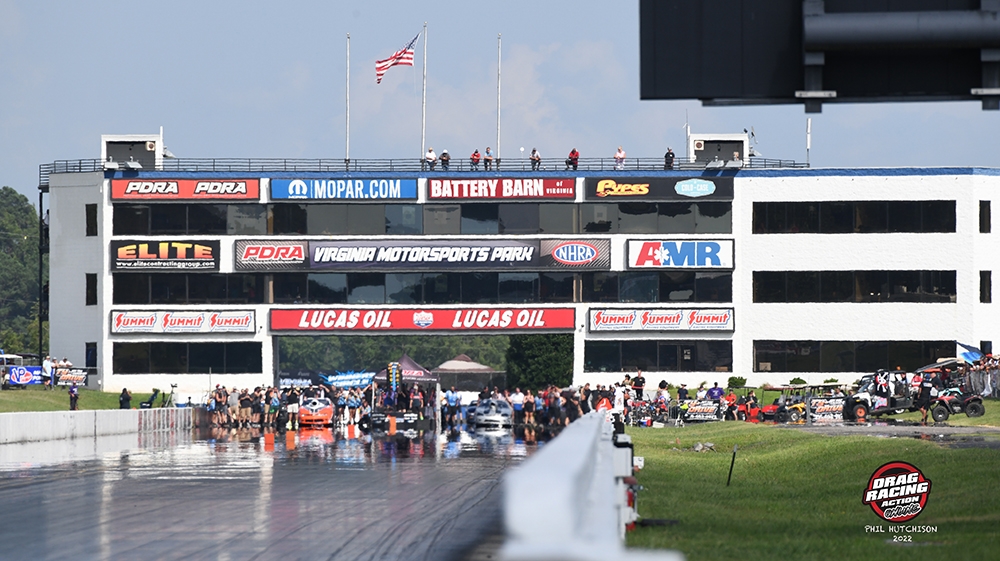 New for the 2022 season is a unique VIP section, which will be located in the grandstand section closest to the starting line for premium viewpoints of all the action. This new package also includes amenities like inside-the-gate platinum parking, tower rooftop access, a custom VIP card and lanyard to commemorate the day along with a NHRA Legends mini-helmet. VIP section tickets are sold individually by day or at a discounted weekend package price with price points starting at only $109.

To purchase tickets to the 2022 Virginia NHRA Nationals, fans can visit NHRA.com/tickets or RaceVMP.com. Children 12 and under are free in general admission with the purchase of an adult ticket. For more information about NHRA, visit www.nhra.com. 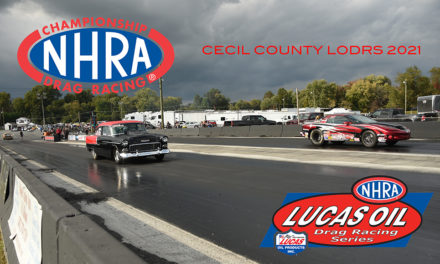 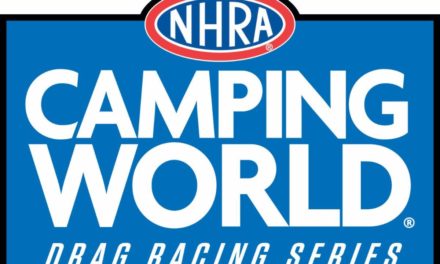 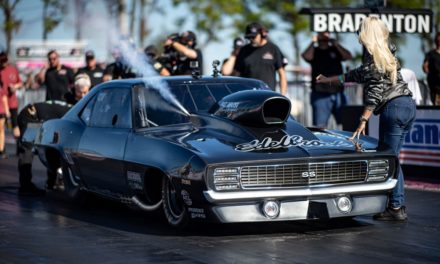 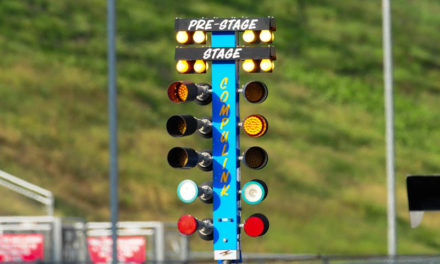