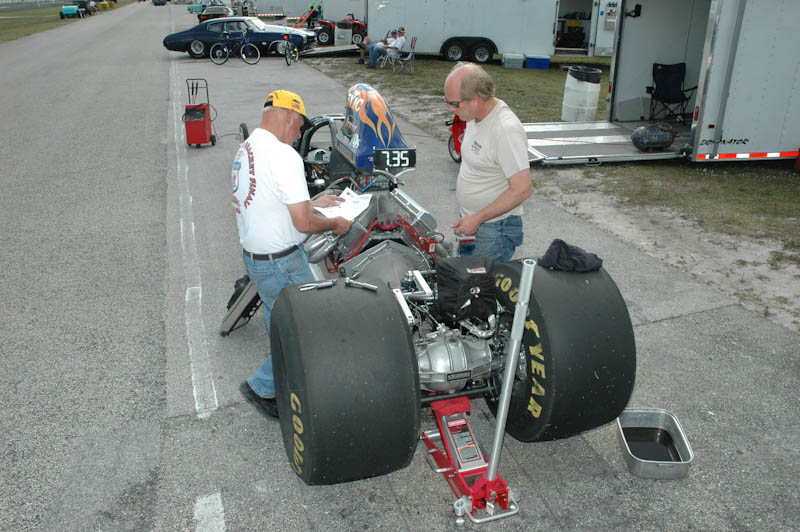 In most cases, the first thing done when you show up at a doctor (other than having them asking for your insurance!) is to have your blood pressure checked. Or to bring this example a little closer to home, the first thing asked by your engine builder when you mention a knocking sound in your engine is, “What’s the oil pressure?”

Why is it then that the first time we even sense we have an automatic transmission problem, we yank that unit out immediately and drop it off at the trans builder with the generic complaint, “Something’s wrong with this thing.” 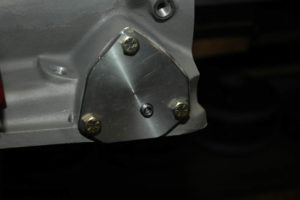 Checking your trans oil pressure is a relatively easy thing to do. Simply screw a 0-300-psi pressure gauge in the port located on any type automatic transmission, and fire up the engine. This side servo cover on a Powerglide transmission, located on the right side of the trans immediately behind the bellhousing, is the place to screw the gauge into. Other styles of transmissions will have similar threaded holes for the same purpose.

In the case of an engine, engine oil is used for only two purposes: 1) Provide lubrication to the bearings and other friction areas; and 2) Provide a primary source of cooling.

Oil inside an automatic transmission is asked to offer the same two things plus a couple of more. The oil must transfer power through the torque converter, in addition to providing the proper amount of hydraulic pressure to operate the various clutches, bands and servos. It also has to provide the correct friction properties for the proper operation of the clutches and bands. All of which is asking quite a bit more from the oil than just your standard engine oil.”

The important key to it all is the proper amount of hydraulic pressure to operate the various internal components. Without pressure, nothing will work right. Which makes something so relatively easy to check, such an important tool.

“It’s the very same as an oil pressure gauge for your engine,” said Paul Forte of Turbo Action at one time. 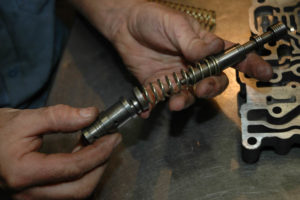 Located within the transmission’s valve body, this series of a spring and valves is what regulates pump pressure. This particular combination is from a Powerglide transmission, but each model trans will have similar valves.

“I’ve said for years that having a trans pressure gauge in your car is equally important and only recently have I noticed people installing them permanently. It’s really a good thing and can’t be stressed enough.”

Now obviously, should you break something like a gear set or other hard part within the trans, checking the pressure would seem futile. However, even when you put in a brand new trans, checking the pressure and noting it somewhere, preferably in your log book (right next to the note you should have added that mentions you did install a new trans), can help you in the future when you might be experiencing a problem with that unit.

Most transmission companies understand this and have installed various test benches to test new or rebuilt transmissions, allowing for the ability to provide their customers with a good-working unit. 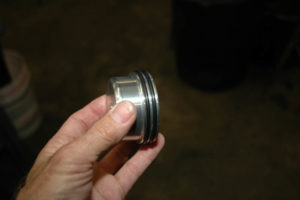 In addition to your transmission’s pump being up to snuff, the various piston and servo seals inside your trans can cause a pressure loss. If one or more of those seals are leaking, it’s much like the piston rings in your engine. If they leak, combustion pressure in the cylinder will be low. If a trans seal leaks, oil will bleed pass them and cause a pressure loss.

All of this is fine from a manufacturing standpoint, but problems can still crop up at the track after many runs. This is the time when checking the trans pressure can give you one more bullet in your arsenal to help diagnose the problem. And it doesn’t take a whole lot of time to achieve results.

“If we could get all our customers to check their trans pressure, it would make our jobs all that much easier,” said John Winter of JW Transmissons. “And checking the pressure isn’t exactly a hard thing to do”

In the case of a Powerglide, there is a 1/8-inch npt (National Pipe Thread) port located on the right side of the transmission, in the servo cover. A Turbo 350 has the same type of port located by the modulator on the right side, while on a Turbo 400 trans, the port is on the left by the shifter arm. In the case of Ford’s C-4 or C-6, the port is by the band adjustment in both cases, while a Torqueflite can get sort of confusing.

“The line pressure reading on a stock Torqueflite trans is located in the middle on the right side,” explained Forte. “However, when most aftermarket manufacturers re-machine a valve body, the oil pressure is shut off to that port because of the way the accumulator is re-plumbed. In any event, there is a check port located on the front kickdown servo, that will allow for a pressure check, but only when the trans is in high gear.”

The pressure readings you receive will vary according to the location of the pressure port in the circuit. In the case of a Powerglide, the pressure read at the low gear servo is low gear pressure, while with a Turbo 400, it’s main line pressure. However, it’s seemingly all the same. Without the proper amount of pressure, all functions of the trans will cease, if not immediately, then in good time.

How much pressure is good? It depends entirely on your particular combination and transmission, however, in most cases anywhere from 150- to 200-psi should be sufficient. 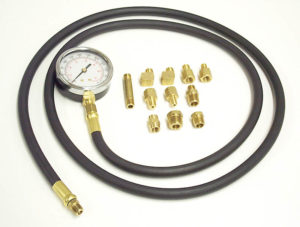 Available from most manufacturers, as well as tool companies, is a very inexpensive transmission oil pressure gauge package that is a worthwhile addition to anyone’s tool box. This unit, from ATI Performance, has all the necessary adapters and fittings to check the pressure on any automatic transmission.

Line pressure can be considerably lower in 3-speed units vs. 2-speed units because the ratio drop on the gear change is far less and demands less work from the clutches to lock. For instance, the line pressure in a 3-speed Torqueflite is rarely higher than 140 PSI. However that same line pressure in a 2-speed Powerglide wouldn’t make one gear change. To hold the same horsepower you’d need 180-psi in the ‘Glide. Since the line pressure is lower in the Torqueflite, the lube circuit that feeds the converter and cooler is also lower (30-40-psi vs. 60-70-psi) than on the GM transmissions. Consequently, the converters are not as efficient in lock up as other units.

The higher the horsepower, the higher the pressure needs to be to allow the clutches the proper lock-up to live on a gear change. As an example of this, some lower horsepower Stock Eliminator cars utilizing Powerglide transmissions might get away with pressures in the low 100-range. While that same pressure in a 1000+-horsepower Super Comp dragster won’t allow the trans to last more than one run.

When the pressure is higher than it needs to be, you’re wasting horsepower driving the pump, being harder on the pump itself, and causing the sealing rings to work harder than needed.

One thing that Dennis Reid of Reid Racing brought to our attention though is volume. “On every revolution of the transmission pump’s internal gears, a certain amount of volume of oil is displaced,” Reid says. “That volume, or flow, will have an effect on pressure.”

A perfect example of this is the machining that has been done within the valve body to create a quick releasing trans brake. Most manufacturers have opened up the ports to the reverse piston so large, that when the trans brake is applied, it takes a good gulp of oil to fill the cavities. When that happens, the pressure drops and does so sometimes so far that in the case of a Powerglide transmission, pressure will be lost to keep the low gear servo engaged. The end result is a car that has a tendency to “back-up” slightly when the trans brake engages.

Bear in mind that a trans brake locks the transmission in both low and reverse gear. With the trans 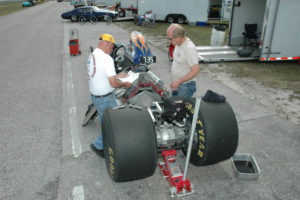 Don’t be so fast to pull that trans out the first time you suspect a problem. Taking a minute or two to check the pump’s oil pressure is akin to having your blood pressure checked or knowing your engine’s oil pressure. It’ll give you or your transmission builder a leg up on attempting to remedy any problems you might have.

placed in low gear, a servo must exert force on the low gear band to keep it locked. When the trans brake is engaged, it opens a flow of oil to the reverse servo or piston. Because the internal cavities of the reverse circuit are so large, it takes a predetermined amount of time for the cavity to fill. If the trans pressure or volume is low, the opening of that cavity will cause the low gear servo to release slightly, causing the trans to engage reverse gear more so than low, and in effect allowing the car to “back-up”.

The cure to this is something termed as “recharge rate”. Think of it like this. Without any faucets open in your house, there is a certain amount of water pressure in your water pipes. By opening one faucet, that pressure is somewhat relieved, as water volume and pressure is eventually built back up by the water pump. Open a second faucet and again, the pressure and volume at the first faucet will slow down until again, the water pump catches back up. It’s the same principle as when you’re enjoying a nice hot shower and your lovely spouse, significant other, or anyone of your darling little children decide to flush the toilet. What happens? Bingo. You’re immediately hit with either scalding hot water or freezing cold. Until the “recharge rate” of your water pump catches back up, you’ll suffer. Same principle with trans pressure.

“That’s why sometimes pressure is not as important as is the actual recharge rate, which is determined by the flow of the pump,” said Reid.

It all still gets back to one simple thing. Not knowing your transmission pressure is akin to sticking your head in the sand. 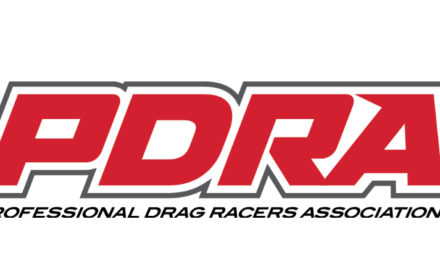 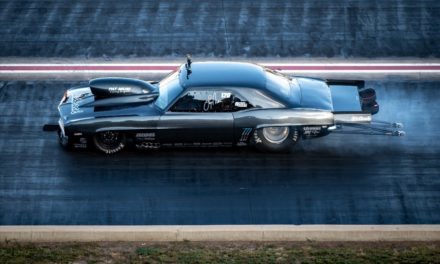 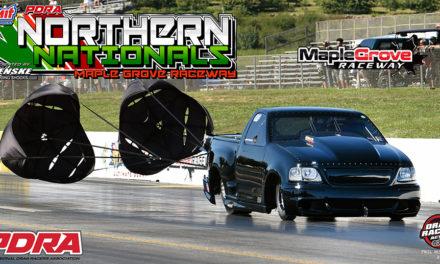 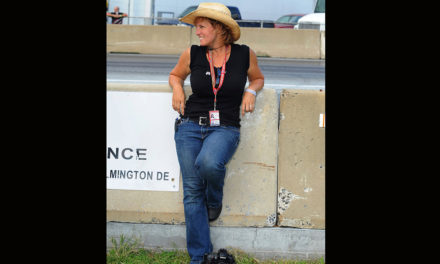