HENDERSON, Nev. (Oct. 27, 2021) – Five-time NHRA Lucas Oil Drag Racing Series world champion Justin Lamb grew up racing at The Strip at Las Vegas Motor Speedway (LVMS). Now a married father of two who resides with his family in Henderson, the former Jr. Drag Racing Series competitor has a wide-ranging history at the pristine facility. This coming weekend at the Dodge // SRT Nationals, he is poised to defend the Stock Eliminator title he earned at the same event last year and repeat his triumph in Super Stock at the division race held there three weeks ago.

“We worked so hard to get the Stone Chevrolet / Silver State Plumbing Super Stock COPO to the winner’s circle, and to see it finally come to fruition was the reward we’ve been looking for,” said Lamb, who claimed the 31st Lucas Oil Drag Racing Series division win of his career. The well-decorated racer has 27 national event titles entering this weekend’s race.

“This car had so much potential from the beginning, but it had its own set of characteristics, and it took time to learn what they were. Now that we have a good handle on it, we’d like to finish what we started in Topeka,” stated Lamb, referring to his runner-up at the Heartland Motorsports Park national in August.

“None of this would be possible without [Super Stock car owners] Larry and Carol Stone of Stone Chevrolet, Silver State Plumbing, RAD Torque Systems, and every single one of the businesses and people that continue to support us. We have maintained some great long-term partnerships, and it would mean a lot to do well at our home race for all of those folks.”

Lamb started the 2021 season on a high note with a Stock Eliminator win at the Division 7 opener at The Strip at Las Vegas Motor Speedway in March, taking his beautifully branded Rad Torque Systems COPO Camaro to a final-round victory. Following his most recent divisional win at The Strip, Lamb is currently No. 3 in Division 7’s Super Stock championship chase, and he is No. 4 in Stock. There is one division race remaining, and it will take place the weekend following the national event.

But for now, Lamb is focused on the immediate days ahead, and he isn’t just aiming for one trophy at the national. He would very much like two, and history has shown that it’s possible – especially at The Strip.

“The RAD Torque Systems COPO Stocker and the Silver State Plumbing Super Stock COPO are both capable of the performance that these competitive categories demand, and they’ve both proven to be winning racecars this season. You don’t want to get too far ahead of yourself, but it’s hard not to think about what could happen,” said Lamb, who is familiar with what it feels like to hold two trophies in Las Vegas.

He is one of six drivers to have pulled off a national event double there. In 2018, Lamb won both Stock and Super Stock to etch his name in the LVMS history books alongside esteemed Sportsman racers David Rampy, Jody Lang, Bo Butner, Peter Biondo, and Jimmy DeFrank. The Las Vegas quarter-mile dragstrip holds the record for the most national event doubles; the next closest is Wild Horse Motorsports Pass near Phoenix, which has hosted the impressive feat four times.

“This racetrack is just special. You feel it when you come through the gates, but you really feel it when you drive under the arch and head to the waterbox,” said Lamb. “To have doubled here at this racetrack, especially because it’s home, is just something you never forget. The trouble is, once you’ve done it and know it’s possible, you want to do it again.” 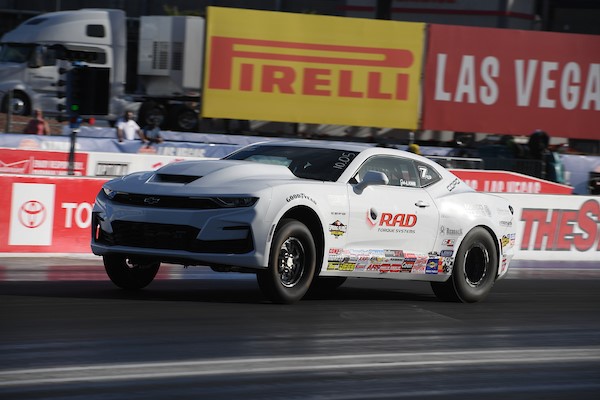 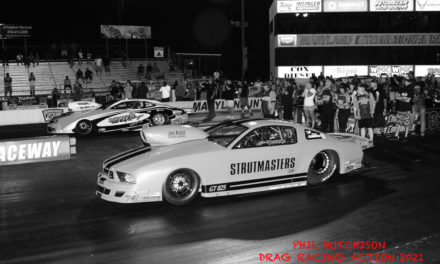 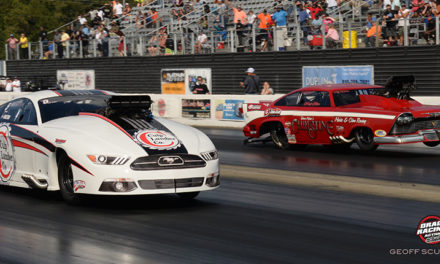