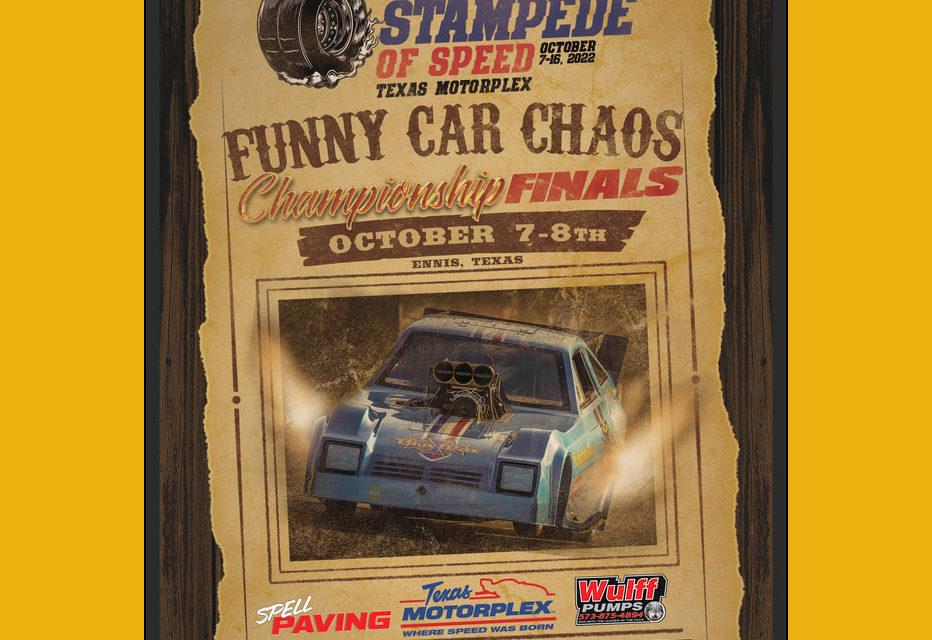 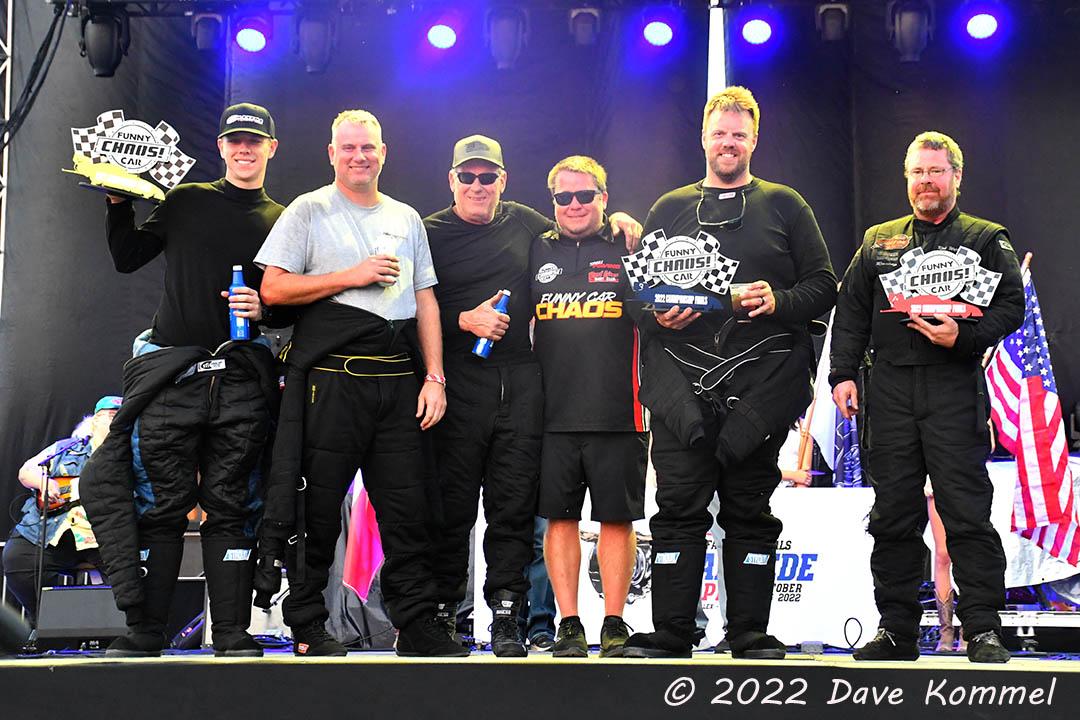 After a season of events that attracted racers from all over the country, the Funny Car Chaos series had their last race of the season kicking off the NHRA Texas Fall Nationals Stampede of Speed at the Texas Motorplex in Ennis TX.

Nearly 40 cars were on hand for the event which featured a unique style of putting the fields together by how quick the driver ran during the qualifying sessions. Chris Graves, event promoter and coordinator said, “The beauty of Funny Car Chaos is that the points earning potential is equal across the A-B-C and sometimes D Fields of racing.

“A racer who has a car built for C Field competition has equal chance of winning the Championship as an A Field car, proven by the results from all our points seasons thus far. Racers with big block Chevrolet combinations running 4.40s have battled at the top of the standings with teams wheeling 18 wheelers through the gate with modern day screw blown or top fuel style combinations between the frame rails.

To keep the racing on a level playing ground, an index is established in the B thru D fields to keep out any cars capable of running quicker, racing slower cars. Graves adds, “The index for first round and semi-finals of racing is simply used to protect the class and its contestants from ‘sand bagging’.

“It is rare that a racer breaks out in Chaos competition, but it happens sometimes. But, always at the Chaos, final rounds are heads up! It sometimes happens than a 3.60 A Field car has three poor qualifying runs, ends up in the B or C Field, then finds their tune up in first round and breaks out by a huge margin, is what it is. The index is two tenths below the top qualifiers elapsed time of the class. That leaves plenty of room for improvement for the eight cars in that class.” 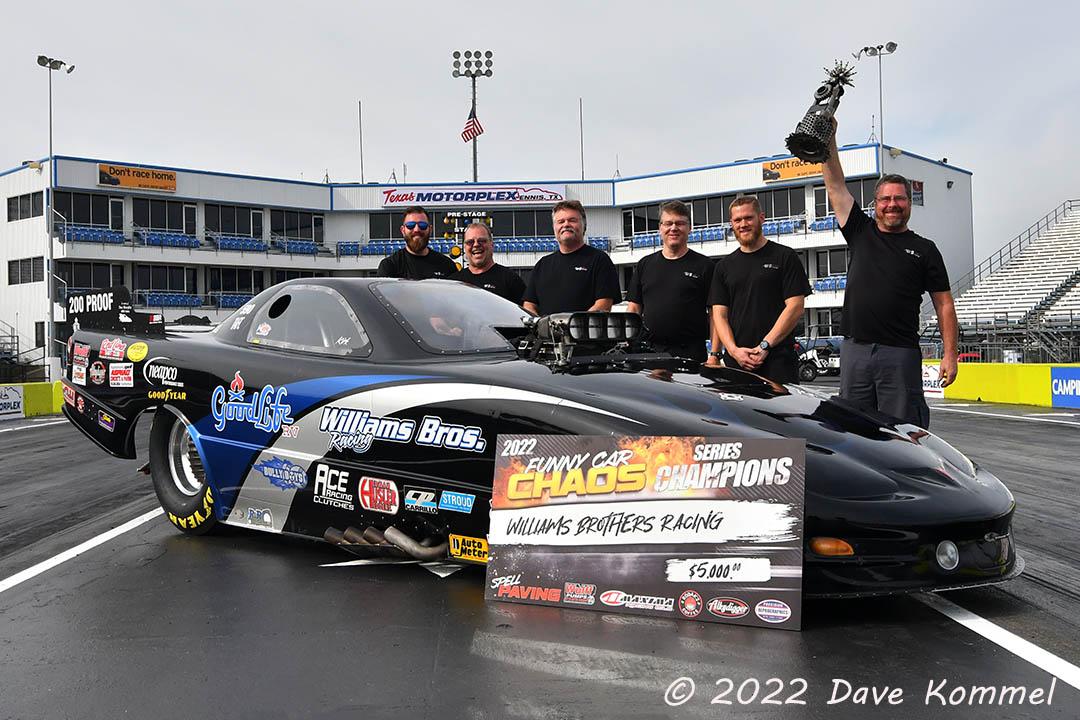 Qualifying in the top spot in the Rodak’s Custom Roasted Coffee “A” field was 2022 season champ Kirk Williams driving the Williams Brother’s “200 Proof” Firebird with a 3.655 @ 211.32 MPH. Williams just rode it from there. 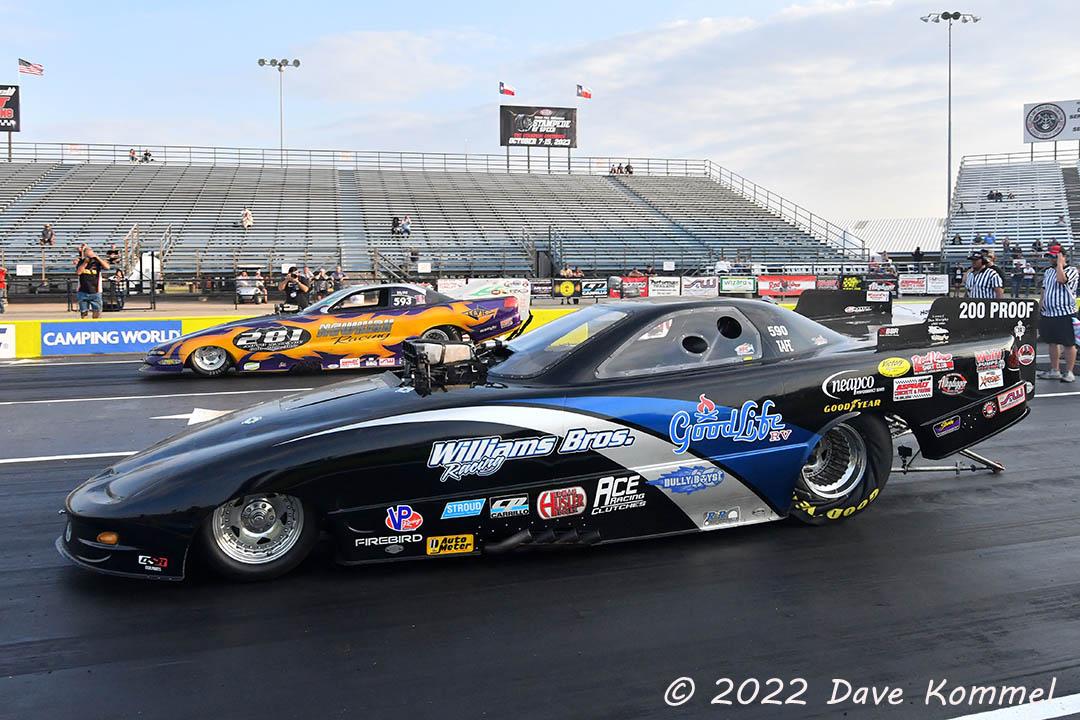 In the finals, Williams defeated the Dodge Avenger of Mike Newkirk with a 3.679 to Newkirk’s close 3.749. Newkirk got the better light with a 0.034 to Williams’ 0.065 making the race closer than the times indicate. Williams had already sewed up the Chaos championship before the finals after a season where the Glenwood Iowa team won nearly every race in 2022. 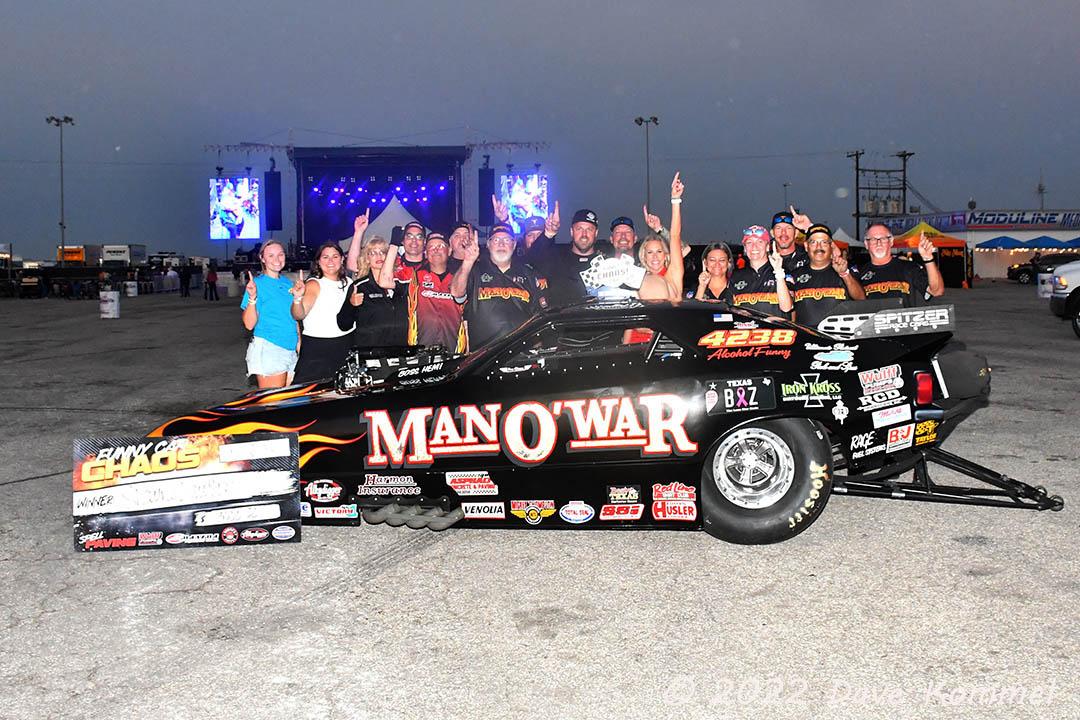 The Alkydigger B Field went to Shayne Lawson and the “Man O War” Mustang when his competition, the “Grim Reeper” Mustang of Mary Reep could not make the bell for the finals. 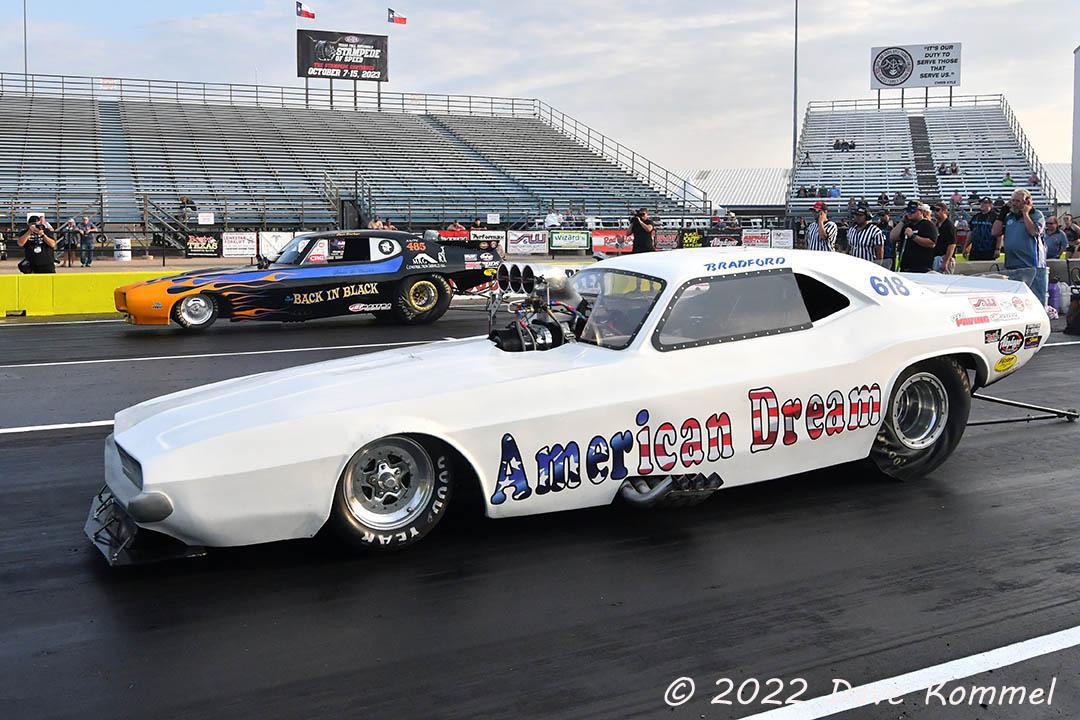 Alex Barker drove his popular “Back In Black” ’70 GTO to a win in Wulff Pumps “C” Field when his competition, the ’70 Challenger of Dustin Bradford left 0.001 too soon turning on the red light in his loss. 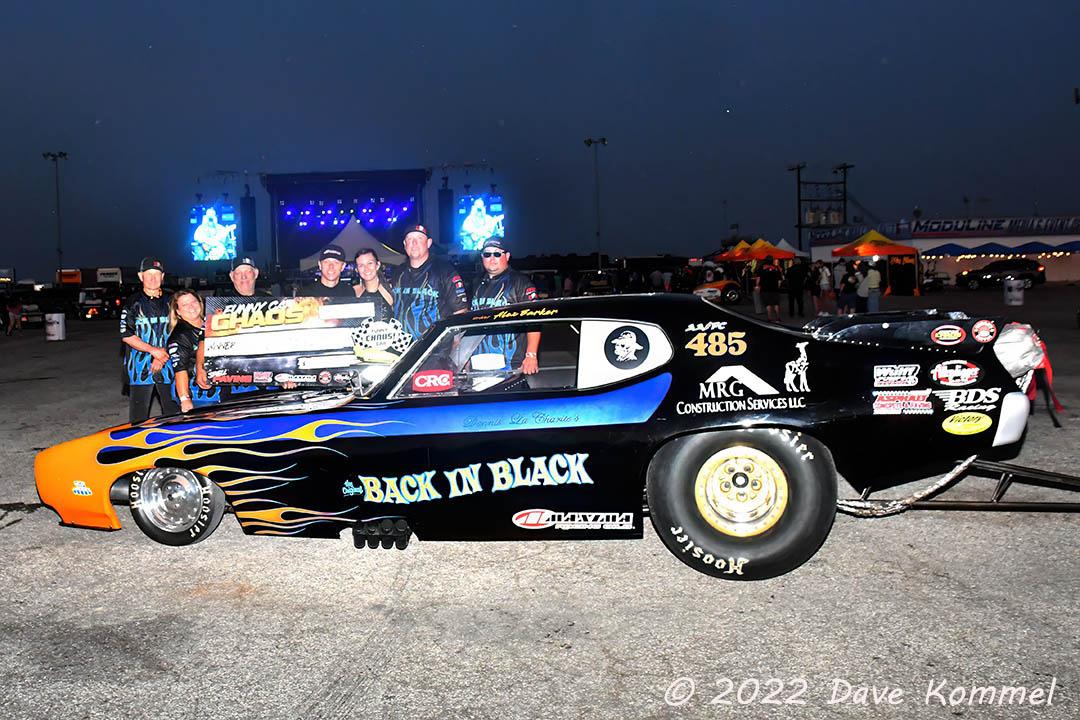 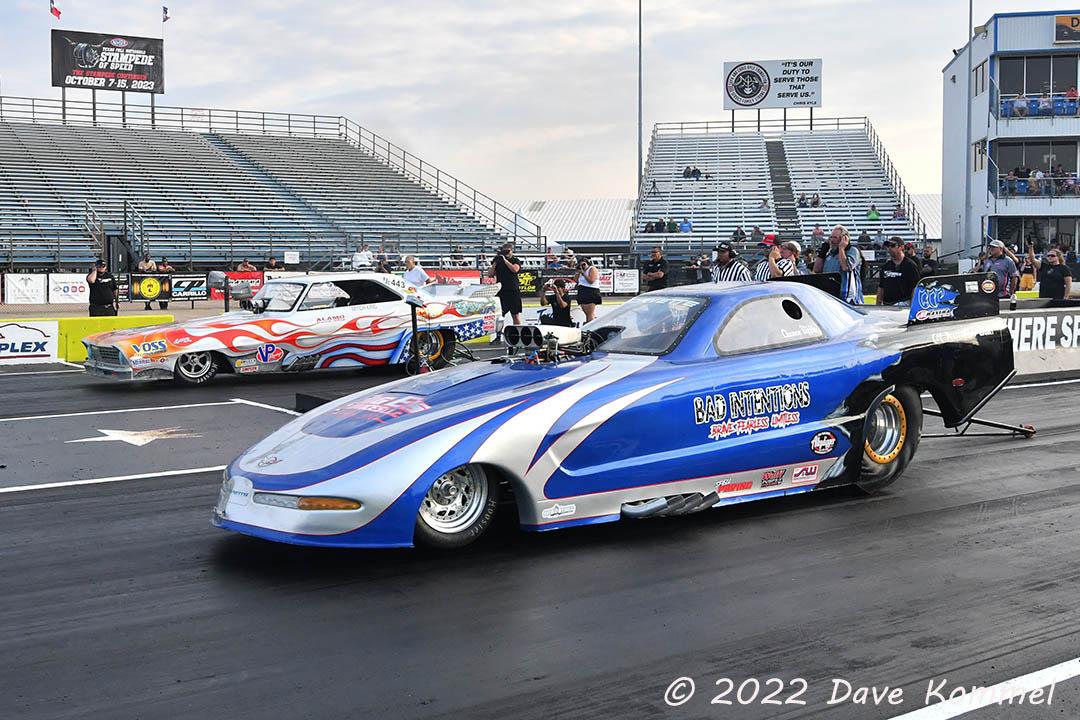 The “D” show went down to long time fuel racer Mitch King behind the wheel of his blown Alamo Speed Shop ’67 Nova and Chance Biffle in his “Bad Intentions” Chevy. Biffle had been laying down good runs throughout the weekend but in the finals against King, left 0.008 too quick giving King the win. King still legged it out running a 4.239 in the victory. 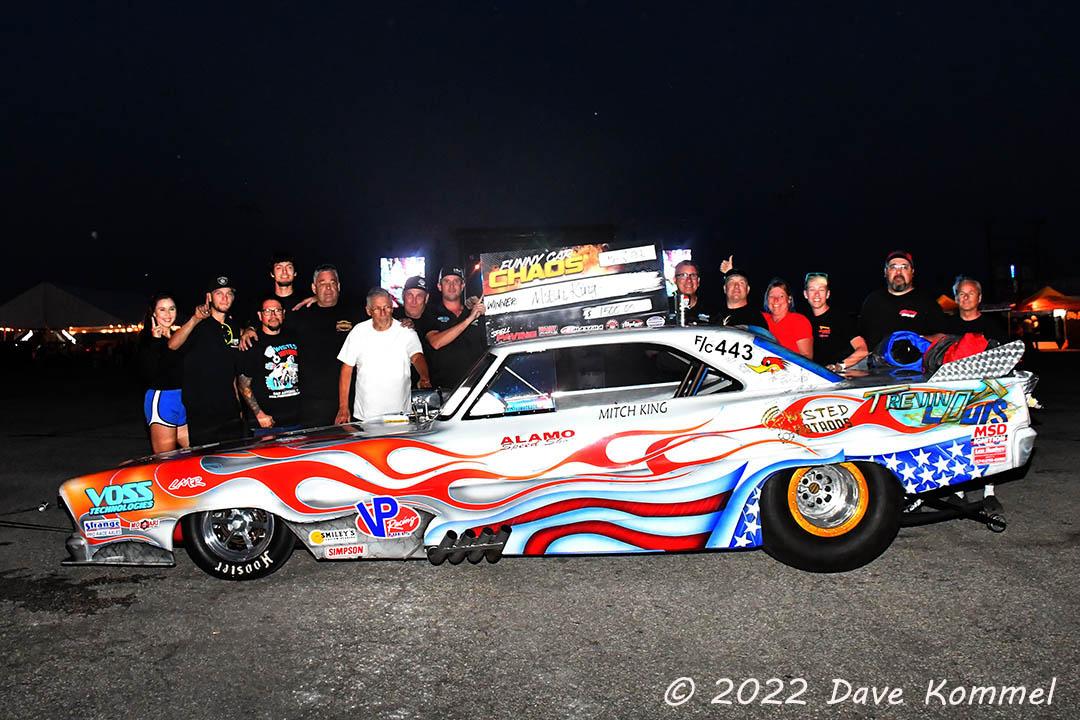 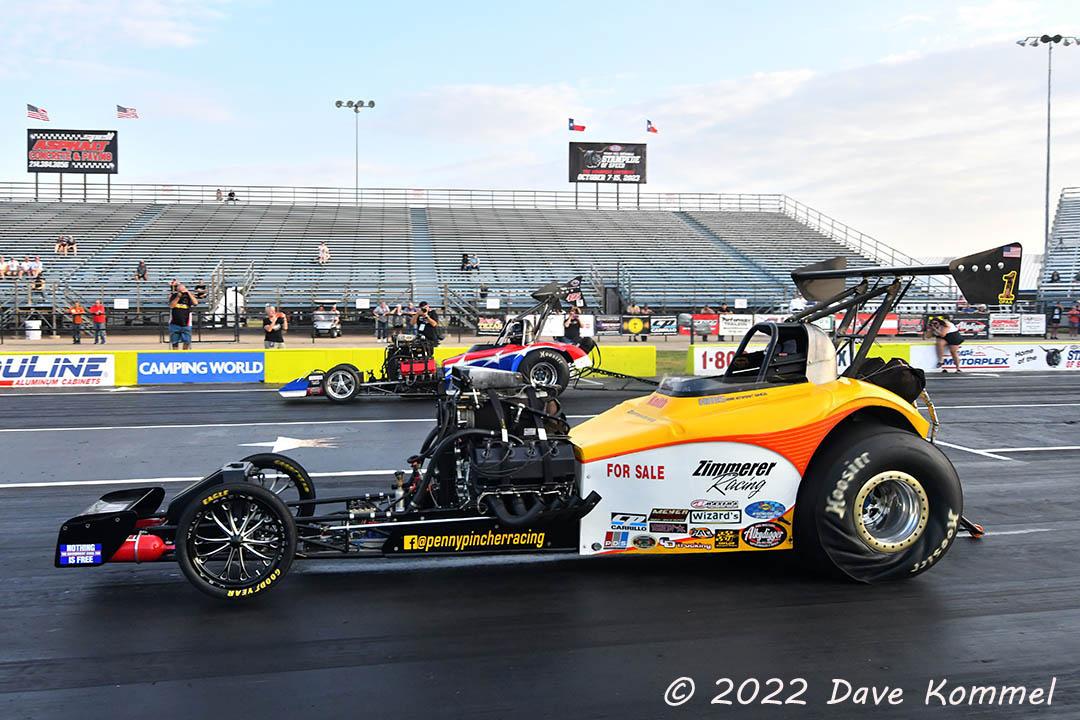 In addition to the floppers, Graves also had a full field of Lonestar Forklift Outlaw Fuel Altereds on hand to battle it out. Taking the win was Keith Zimmerer in the Zimmerer Racing Penny Pincher over the “Texas Tremor” of Jimmy Jones. 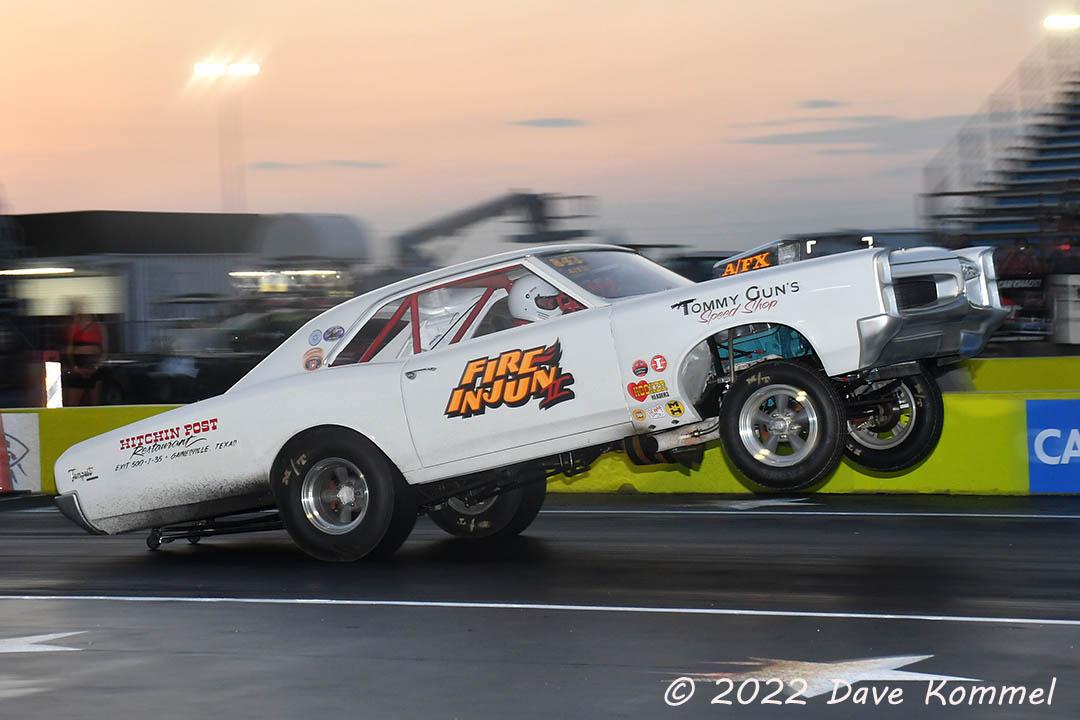 Also on hand were a full field of Gassers along with bracket bombers and a concert featuring Niko Moon and Kolby Cooper to close the show.

After Kirk Williams all conquering season, Tom Furches grabbed the #2 spot in the championship followed by Jeff Cameron, Dustin Bradford, and Chris Schneider taking third thru fifth in the 2022 season sharing a part of the $10,000 payout presented by Fat Tirez Apparel. 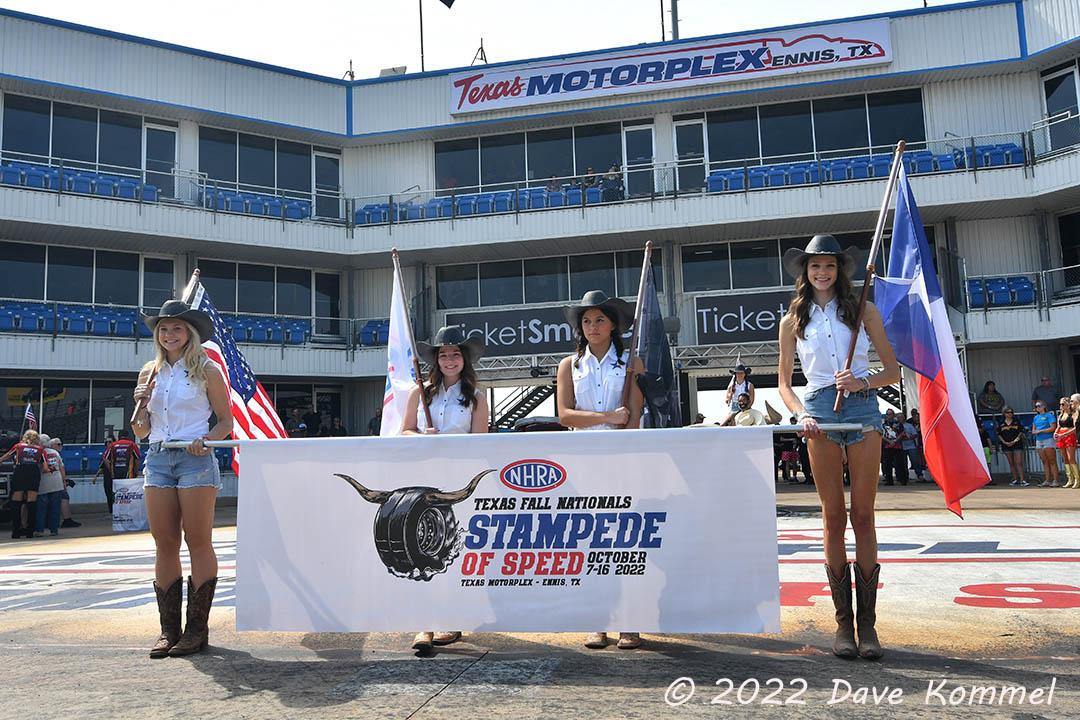 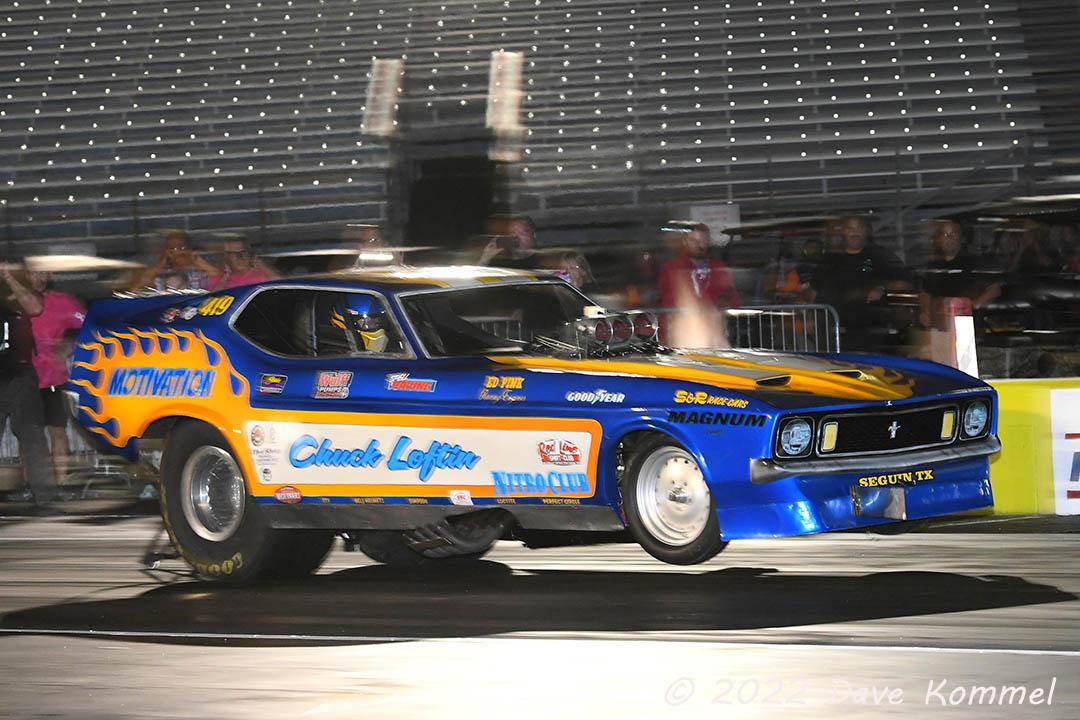 For more of Dave Kommel’s great images from the Funny Car Chaos, go to: 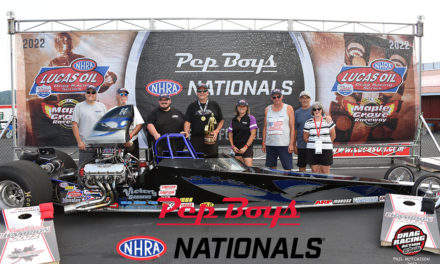 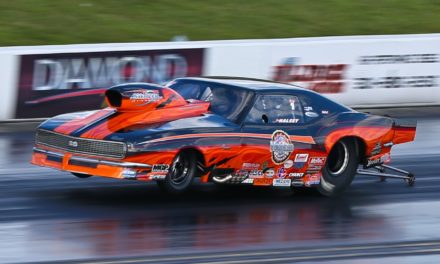 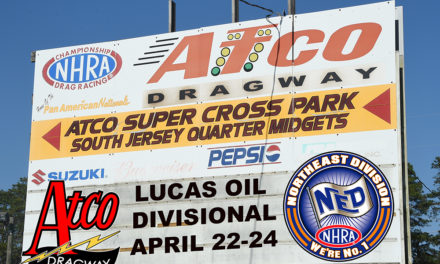 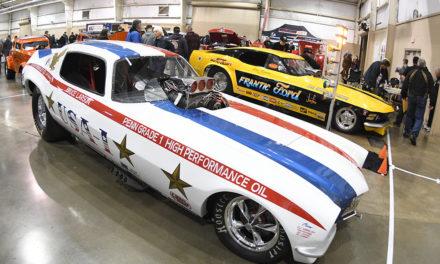